Tufted Rug vs a Woven Rug 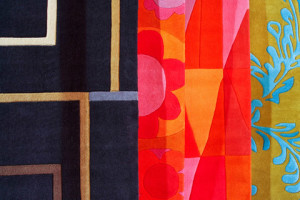 Tufted Rugs are made like a sandwich. The face yarns, typically 100% wool, are stitched into a primary backing that resembles fish netting, usually made from a synthetic material. (In some cases, jute is used instead of synthetic material. Jute is a long, soft and shiny vegetable fiber that is typically used to make burlap, Hessian or gunny cloth and is one of the most affordable natural fibers.) The little pieces of cut or looped yarn then poke through the backing. A secondary backing is attached by adhesives to the primary backing. The secondary backing is most often a heavy cotton material resembling a canvas. Many people that purchase wool tufted rugs complain about odors. The odors from a wool tufted rug can emanate from the off gassing of the adhesives used to sandwich the rug together. Tufting machines capable of uniform, patterned or varied settings are used to loop the fibers through the base material. Tufted carpets are typically sturdy and can last a long time if they are well cared for. Several popular styles of carpeting are made through tufting machines including Berber carpets. 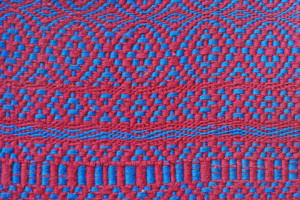 Woven rugs are made from a process of weaving materials together. The face yarns are woven and formed on a loom by interweaving warp and weft yarns. (Warp is defined as the lengthwise or longitudinal thread in a roll and weft is the transverse thread. Each time the weft thread crosses a warp thread it is called a pick.) There are many different weaving patterns and fibers that are used to construct woven rugs. Karastan makes high-end machine woven wool rugs but many cheap rug knockoffs are made with polypropylene or mercerized cotton (imitation silk). Hand knotted, loomed rugs are of the highest quality and fetch the highest price. They should feel smooth and heavy and lie flat without puckering. Weaving a hand-knotted rug requires skill and time. One of the markers of quality in these rugs is the density of the number of knots per square inch; the more dense the better! A complex pattern can require very dense knotting and it can take a long time to produce. An average weaver can tie about 10,000 knots per day which means that these rugs take a fair amount of time to make, partly accounting for their cost.

Once we have completed a physical inspection and determined how and where your rug was made, what fibers were used and the colorfastness of the dyes we decide whether to clean or wash the rug. Woven rugs are generally washed using the total immersion method but not always because, for instance, some Afghan rugs bleed color. Moroccan rugs create other problems and many Persian rugs made after 1979 have issues. Tufted rugs cannot be immersed in water and require a dry oriental foam shampoo cleaning or one of the other methods we have available to restore the beauty and value to your home’s center piece.