History of the Persian Rug 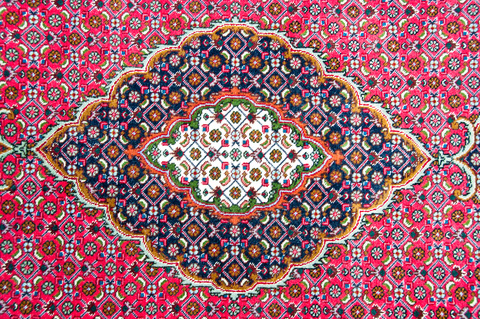 The history of the Persian rug or carpet goes back 2,500 years and weaves a story of artistic beauty, pioneer carpet weavers and closely guarded family skills passed down from fathers to sons. Persian rug weaving gives insight into the heritage of a great civilization.

The origin of Persian carpets was humble; they filled a simple need to cover a floor or entranceway and protect nomadic tribesmen from the cold and damp. As their beauty grew through more intricate designs and finer threads, kings and noblemen became interested and saw their collection as a sign of wealth and distinction.

Because fibers break down over time ancient rugs can be difficult to find. Still, in 1949 Russian archaeologists Rudenko and Griaznov uncovered the world’s oldest known “knotted” carpet in the Pazyryk valley, about 5000 feet up on the frozen tombs of Scythian chiefs in the Altai Mountains in Siberia. The carpet dates back to the fifth century BCE and is recognized for its rare beauty and intricate weave.  The rug is now displayed in the Hermitage Museum of Leningrad.

Cyrus the Great who founded the Persian Empire nearly 2,500 years ago is largely credited with introducing the art of carpet making to the Persians. His court was adorned with beautiful carpets and his tomb at Pasargadae near Persepolis, was decorated with precious carpets. It is likely, however, that the Persian nomads knew how to make knotted carpets for practical uses as their herds of sheep and goats supplied them with high quality wool for weaving.

Chinese texts from the Sassanid Dynasty (224-641 CE) mark the earliest evidence of carpets. The Arab Emperor Heraclius conquered Ctesiphon, the Sassanian capital in 628 CE and again in 637 CE and among other treasures brought back many beautiful carpets. The most famous was the “Garden Carpet” named “Spring time of the Khosro”. The carpet was made for the ruler Khosro during the period of 531-579 CE and was 90 Feet square. Sadly, the Arabs cut it into pieces and sold them off.

The Arab Caliphates used the Persian knot to make carpets; the wool thread forms a single turn about the warp thread then one end comes out over this thread and the other over the next warp thread.
The Caliphates were conquered by a Turkish tribe named Seljok in 1038 CE, thus beginning a new trend in Persian carpet making that lasted from 1038-1194 CE. The Seljuk women were skilled carpet makers and specialized in the Turkish knot. The Turkish knot, where the yarn is wrapped twice around two adjacent warp threads and the ends are drawn out between these two threads, is still used in the art of carpet making in the provinces of Azerbaijan and Hamadan.

The Mongol invasion and subsequent control of Persia from 1220-1449 was initially brutal but ended in harmony. The Ilkhan king Ghazan Khan who ruled from 1295-1304 covered his palace floors in precious carpets. The Mongol leader Shah Rokh (1409-1446) encouraged reconstruction of the area and all artistic activities native to the region including carpet making. The carpets produced in this era had simple, geometric designs.

The 16th century Safavid Dynasty represented the height of Persian carpet making. The first material proof of the art of carpet making dates back to this period; there are about 1,500 rugs hanging in museums and private collections around the world from this era. Shah Abbas reigned from 1587-1629; he encouraged trade with European countries and built a court workshop for artists and skilled tradesmen to create beautiful and intricate carpets. The carpets were made of silk with gold and silver threads. Two of the most famous carpets in the world were made in 1539 for the mosque of Ardebil. The large carpet is currently on display at London’s Victoria and Albert Museum and the smaller carpet is home at the Los Angeles County Museum.

The Afghans invaded Persia in 1722 and destroyed the court workshop. During their short rule there was no emphasis on the arts. In 1736 a Khorasan Chieftain named Nader Khan became the Shah of Persia and used all the country’s resources in wars against the Afghans, Turks and Russians. There were no carpets of significance produced during his rule or afterward for several years. The craft was only kept alive by nomads and small village craftsmen.

Finally, trade and carpet craftsmanship came back to the fore in the last part of the 19th Century under Qajar leadership. Tabriz merchants made a great living exporting carpets to Europe through Istanbul and by the end of the 19th Century there were even a few European and American companies set up in Persia to produce carpets for western customers.
Although the trade embargo of the 1970s has had an impact on Iranian carpets, carpet weaving is still the most prolific specialty craft in Iran. Persian carpets are known for their rich colors, spectacular designs and quality materials. Persian carpets adorn castles, mansions, museums and famous buildings all over the world.

If you own a Persian carpet you know that it should be treated like a work of art. You can trust the Persian Rug Cleaning experts at Steam Sweepers to clean and care for your rug. Please call today for pick up and a price quote!