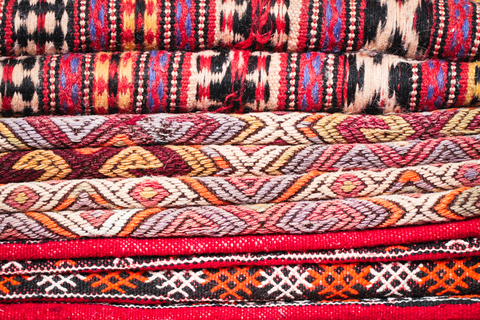 ‘Oriental rugs’ is often used as a generic label for any type of intricately patterned carpet. Genuine Oriental rugs are in fact quite unique in both workmanship and design: they are hand-knotted pile or flat-woven fabric, made in the traditional weaving areas across the Middle East and Far East (not in Western Europe or the United States.) Oriental rugs are never made by machine; neither do they ever consist of nylon or polypropylene fibers. Hand knotted rugs are made from natural fibers, such as wool, silk and cotton. Oriental rug differences are often subtle in to an untrained eye.

There are distinctions between hand-woven and hand-knotted Oriental rugs; however, their merit as fine, hand-crafted carpet is very much the same. To add further confusion, there is a type of rug native to China and India which is ‘hand-tufted’: these rugs are made using a type of gun which is hand-operated and punches strands of wool into a canvas stretched out on a frame. These hand tufted rugs are not considered true Oriental rugs. Hand tufted rugs are mass produced in China today and sold all across the United States as 100% wool hand tufted rugs. The foundation or secondary backing is held together with latex adhesives causing off gassing odors. Its my recommendation to stay away from these so called Oriental rugs.

Flat weave Rugs – often called ‘Killims’ – vary in terms of pattern, style, and technique. The term Killim also refers to a pile-less rug because the weft yarn creates the finished surface and design of this type of Oriental rug. All flat weave rugs are woven without pile. These rugs are primarily made in China,Turkey, Romania, Iran and Bulgaria. Flat-weave Oriental rugs are reversible which if done regularly can extend the life of the rug by years.

Pile rugs are the jewel of all Oriental rugs, generally made using one of two types of knot: (Persian, Senneh) or the (Turkish, Ghiordes).Both knots are “tied” or looped around two warp strings. Most weaving areas of the world use the Persian knot, but Turkey, Armenia, and Azerbaijan are the three main countries to use the Turkish variety. It takes a skilled eye to discern the difference between these two the knots.

So-called ‘Jufti’ knots can be Persian or Turkish in style, and are highly economical in that their use cuts the time taken to make a rug, and the amount of material used, in half. Jufti knots are wound round four warp strings as opposed to the normal two.

Oriental rug differences occur primarily when their country of origin differs; the rugs unique design and patterning reflects where they were made. Design patters of Oriental rugs fall into two types of categories, (geometric, rectilinear) or (floral, curvilinear).

Persian: The Persian rug is arguably the most well-known Oriental rug; the quintessential patterned carpet is revered for its intricacy and symbolism. A Persian rug is known for both its floral patterning and its high knot count which gives the rug it’s depth. This rug is also famed for its colorful content and anything up to 25 colors can be used in a single production. Persian rugs are all made from extremely fine dhumba sheep wool from Pakistan – not Iran.

Bokhara: These rugs are made in Pakistan and a high quality one can be almost blanket-like in texture. These Oriental rugs traditionally have geometric designs over solid blocks of color. The Bokara is a Mori Weave rug using an asymmetrical knots,it’s been in production since World War II.

Chobi: The Tribal Choci rug is made using only fade-resistant natural dyes, and is hand-knotted with hand-spun wool primarily through the use of drop spindle. The patterns tend to be geometric and floral in design. The most labour-intensive of the Tribal rugs, the Chobi natural dyes are made with only hand-gathered natural barks, fruit, vegetables, and shells.

Kazak: Another of the more popular Tribal Oriental rugs, the Kazak is known for it’s warm colors such as reds, ivories and indigo blues. Less labour-intensive than the Chobi, the natural dyes used in this rug tend to be commercially farmed. Some artisans choose to supplement the natural dye with commercially bought dye so they can tailor-make the color exactly to their own specification. The Kazak wools are hand-spun and made in Afghanistan.

Qashqai: This Tribal styled Oriental rug is predominantly deep blue in color speckled with an array of complimentary shades. The wool is hand-spun using a spinning wheel and the dyes are a combination of natural and synthetic. Qashqai use an intricate knot known as the senna to create their unique design.

Many people fail to spot Oriental rug differences: many owned are believed to be the genuine article, when in fact they are machine-made; and many are believed to be from a specific area when they actually originate from somewhere very different.

We are professional rug cleaning experts.  Give us a call if you have any questions or would like a quote! 360-647-9290